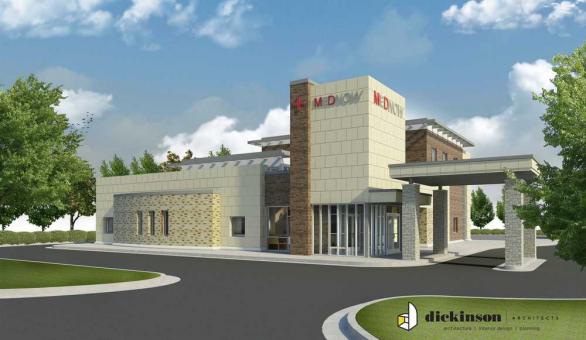 As patient co-pays rose and emergency rooms became crowded, consumers demanded convenient medical treatment available later in the evening, on weekends and with no appointment needed.

To fill the niche, in 2009 Newton opened his first physician-staffed MedNow Prompt Care on North Belair Road in Evans. By 2013, his second location opened on Peach Orchard Road in south Augusta, and he’s now building his third multimillion dollar facility, set to open at 2851 Washington Road in May.

“Old magazines in the waiting room and a long wait were just things people put up with because that’s what you had to do,” said Newton, an emergency care physician. “We saw that there was an opportunity to serve people in a way that could be done in a more efficient setting.”

Now, fueled by the Affordable Care Act adding millions of newly-insured people to the market and creating high-deductible coverage plans, Newton sees a bright future for the urgent-care industry.

In the past year, patient visits in Newton’s two offices have increased by 40 percent to about 700 patients each week, and that has required him to hire more staff, he said.

According to the Urgent Care Association of America, 83 percent of urgent care facilities experienced growth in 2013, while about 40 percent noted an increase in the number of patient visits and 60 percent reported adding locations, services or space to accommodate growth.

Currently, there are more than 6,400 urgent-care locations nationwide.

Though growth in the sector has spiked in the past few years, urgent care got its start, albeit slowly, in the late 1970s and started picking up steam in the 1990s as a viable place to get medical care for patients unable to see their regular physician.

In recent years, the industry’s growth has been led by patients’ finding it difficult to get primary care, emergency room wait times and overcrowding as well as physicians acting on these needs by opening prompt-care centers in their communities, according to the Urgent Care Association.

“I think there’s a lot of options now, so it’s a very interesting time in terms of how we are changing health care in this country,” Hansen-Turton said. “I think it’s good from a consumer perspective. It’s very consumer driven.”

University Hospital has been on the front end of the trend. In 1992, the health care system opened its first Prompt Care in Columbia County, later moving the center to Evans in 1994. Also in 1994, University added a Prompt Care in south Augusta that has since morphed into a Primary Care facility.

University is still in growth mode, having added a Prompt Care in Grovetown last year and opening more locations across North Augusta and Aiken later this year.

“They’re not inexpensive (to build) and they’re not inexpensive to staff, but they’ve been very successful,” said University CEO Jim Davis. “People are looking for high-quality care that’s affordable and easily accessible with no appointments. There is a shortage of primary care physicians out there in the market and getting in to (see) one can sometimes be a challenge.”

Both operations run by University Hospital and Newton provide physician oversight, and, equipped with X-ray and lab services, can treat a host of illnesses and injuries that are not life-threatening. Each also gives patients the option of making an online appointment shortly before arrival to ensure a short wait.

“People are used to getting things quickly with the Internet,” Davis said. “You can really move at the speed of light nowadays, and I think people are seeking that in their health care as well.”

The format also has been picked up in recent years by drugstore chains and big-box retailers that now offer limited-service retail clinics across store locations. These are staffed by nurse practitioners or physician assistants.

CVS introduced Min­uteClinic in 2000 and it is now found in more than 800 stores, with 150 additional locations on the way this year. Walgreens started its Healthcare Clinic in 2006 and has more than 400 sites today. National chains such as Kroger, Target and Wal-Mart also have rolled out with their own walk-in clinic prototypes.

According to the Conven­ient Care Association, there were more than 1,600 retail health clinics located in high-traffic areas in 2013. By 2016, the national trade organization expects that number to nearly double to 3,000.

“Individuals want care when it is convenient for them, in accessible locations, and at lower costs than traditional providers have been able to deliver care,” he said. “They are a boon to working families. And, they might support greater utilization of preventive services. For example, more people might get flu, pneumonia and shingles vaccines if they are available at the local urgent care clinic than if they were not.”

Locally, Newton still sees room for business expansion. In the next two years, he plans to add one or two more MedNow locations and is currently looking in the Grovetown area.

Both he and Hansen-Turton named telehealth – a way of using technology to provide medical service to those in remote or rural areas who might not have access to traditional forms of health care – as the next wave for convenient-care providers.

Newton said he is already considering how best to reach nearby communities such as Waynesboro and Millen, both in Georgia, that likely cannot support a fully-staffed health center but could be connected to a physician via one of his main centers in the Augusta area.

“We want to be wise about how we expand,” Newton said, “but there seems to be clearly enough demand.”